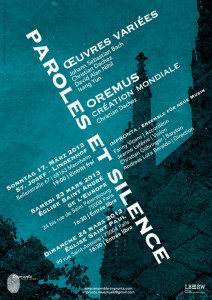 The second project of our ensemble took place under the motto of the Parisian music festival Marais Chrétien 2013 “Paroles et Silence”. The structure of the programme tries to span a network between the music of Johann Sebastian Bach and that of Dachez, Yuns and Nihils. Yun’s Royal Theme is placed – deliberately antichronologically – before Bach’s model.

The world premiere of Dachez’s “Oremus” (we pray) is the focus of the concert and offers space for meditation – something that requires words and silence at the same time. Dachez draws soundscapes in his work. As music that is not subject to time, it opens wide spaces. The Aria Stölzel’s “Bist du bei mir”, not sung, but instrumentally performed, offers an attempt to the simultaneity of word and silence. The word is played, but not sung – like a praying person, who speaks inside, but does not pronounce the words.

The Instant d’antans by David Alan Nihil are on this level between contemporary music and the baroque music of Bach. They move between times and set a musical imprint – Impronta.