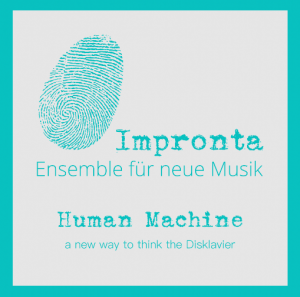 One of the features of the late twentieth century music was the gradual mechanization of music, showing in a more and more explicit way the ouster of human components, such as the emotions or the oscillation of tempo and dynamics in the performances.

This has also affected the interpreters who were asked to turn their expressivity into a more precise and uniformed (even flattened) execution. Great example of this type of music are the studies for player piano by Conlon Nancarrow in which the human performer is replaced by a mechanical piano which hammers were driven by perforated rollers, or certain piano studies by Ligeti, designed for pianists in flesh and blood but with a strong mechanical component, works that often, given the impracticality of the performance, were entrusted to the execution of playerpiano or a disklavier.

The project “Human machine” aims to bring back music to the expressive dimension of the human being, to find in the “inaccuracy” of the human performance not an aspect of imprecision, but elegance, because beauty is made of asymmetries, little nuances that make things familiar to us.
Taking these ideas in mind we decided to do the reverse operation to “mechanize”, that is to “humanize” what, by its nature, is born mechanic. The central figure of the project is the disklavier, a mechanical piano driven by a midi controller.
We have developed a software, through which the disklavier sets its parameters in such a way to be in accordance with the human performance of the ensemble.
A machine becomes in that way a real component of the ensemble, and in this way it is easier for us to share a certain familiarity with it, understand it and love it because it closest to us.
In the concert program that we present here, we can find three particular situations:

• the disklavier as a machine, not influenced by human parameters, performing alone.
(As in the piece: Piano Etude no. 14a by György Ligeti)

• the disklavier “humanized”, as a member of the ensemble, (as in the piece by Sepúlveda Rios)

• the disklavier “humanized”, as a member of the ensemble, prepared in the way to produce harmonic sounds with specific acoustic phenomena (as in the piece by Elia)

The choice of using the disklavier in an ensemble is due to the specificity of the instrument: play with speed impossible for the human performer, and a simultaneity of sounds not conceivable even through the use of more performers on the same instrument or more pianos.

The project on tour

The project was premiered in the Swiss Festival for contemporary Music “Oggi Musica” in Lugano, in the date of February 16, 2017 at the new Auditorium LAC.
The following performances took place at the Budapest Music Center (BMC) within the CAFe Budapest (Contemporary Art Festival Budapest) October 19, 2017 and at the Vienna Concert Hall Yamaha October 20, 2017. Due to the surprising death of Klaus Huber on October 2, 2017, we dedicated the concerts in Budapest and Vienna to his memory.
The sponsor of the tour were: Lugano Musica, Oggimusica, Yamaha, Pro Helvetia, CAFe Budapest, BMC.