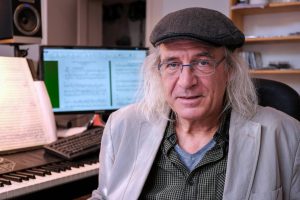 We wish to congratulate with all the participants for the high quality of their works. After a long consultations we selected the winner of our call for scores.

FIBONACCI-GAILLARDE MIT PAGANINI for violin and Disklavier by Bernd Thewes

Soon this piece will be published by the Impronta-Edition UG

Born in 1957 in Saarbrücken, Thewes played accordeon, trumpet and electric organ as a child and from 1971 piano and keyboards (classic, rock, jazz and free improvisation). He studied school music in Saarbrücken (et al with Theo Brandmüller) und musicology in Mainz (master thesis: About the relationship between notation and composition through the example of Lachenmann, Stockhausen and Feldman). From 1988-1997 he was together with Michael Gross artistic director and organisator of the Illinger Burgfest für Neue Musik. As composer he is basically autodidact. His work includes concertant composition from solo to full orchestra, half-concertant forms, radiophonic projects, self-made instruments, music theatre, sound installations, electronic music and film music (especially for silent films). In the last years he realized various compositions on behalf od ARTE and ZDF in the field of film music (et al films of Hans Richter and Carl Th. Dreyer) or editings of historic film musics like Edmund Meisels Berlin, die Sinfonie der Großstadt for the legendary film of W. Ruttmann or also from Meisel the music to the revolutionary film Oktober from S. Eisenstein. In both cases he wrote new orchestration out of the historic and available piano reductions – in some way polystilistic and under user of unusual instruments. The newest orchestra piece is the life silent film music for Die Liebe der Jeanne Ney from G. W. Pabst, which mixes throughout big sinfonic the filmic genre-mix of the 20’s with styles of the 70’s.

For further info and for applying visit the website: http://www.humanmachineproject.com/home/call.html